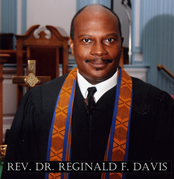 Reginald F. Davis, Pastor of the historic First Baptist Church in Williamsburg, Virginia holds a Master of Divinity degree from Colgate Rochester Divinity School in New York and a Doctorate in Humanities, with a concentration in African American Studies from Florida State University. Pastor Davis received his Bachelor of Art degree from the Incarnate Word College in San Antonio, Texas. He has served as the Dean of Students at Garrett-Evangelical Theological Seminary in Evanston, Illinois.

Dr. Davis has also served on the faculties of Barry University and Florida A&M University in Tallahassee. In 2004 the Journal of Religious Thought accepted publication of his article titled "African American Interpretation of Scripture." He is author of the groundbreaking work, "Frederick Douglas: Precursor of Liberation Theology" (Mercer University Press1, 2005). Dr. Davis’ writings on Frederick Douglass are contained in an anthology called "Empire and the Christian Tradition, (Portess Press, 2007).

He is also the author of the much discussed work titled, "The Black Church Relevant or Irrelevant in the 21st Century” (Smyth & Helwys , 2010), and the recently acclaimed “Bible Study for Busy Pastors and Ministers” (Wipf & Stock, 2011), ready-made lessons to transform members into disciples and an audience into an army. His most recent work, "From Wall Street To Main Street - Why America is Being Destroyed from Within" (Wipf and Stock, 2013), challenges us as a country to find our moral compass again, and make God central in in our nation.